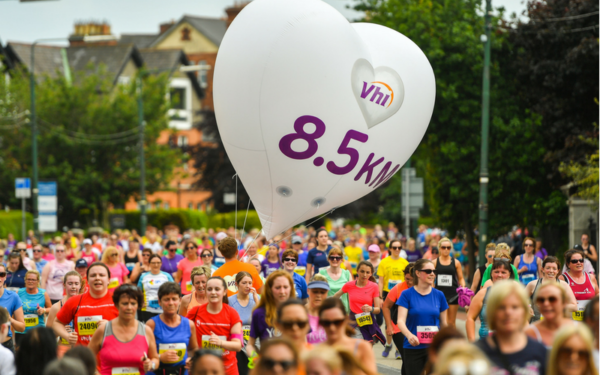 People engaged with the brand

The Vhi Women’s Mini Marathon is the biggest all women’s event of its kind in the world. It has grown from its beginnings in 1983 with almost 9,000 participants to a staggering 40,000 plus women annually in recent years.

Since 1983 more than 1 million women have participated in the event. This event has grown as women’s interest in their own health and vitality has developed over the last three decades.

Furthermore, it is not only women who have benefited from the event, but the charities are also big winners.

Participative and recreational running is a growth area in sport with 23% of all Irish people aged between 25-44 years old running regularly and so as Ireland’s leading healthcare insurer, Vhi was a perfect fit for the sponsorship when thy acquired it in 2014.

Vhi’s first year’s objective was to flush out the previous sponsor’s decade-long brand association and to instate Vhi’s brand association as new title sponsor for the event.  Verve was the agency selected to activate for the brand in order to establish the sponsorship and event since that extremely successful first year, we have continued to partner with Vhi to build on this achievement and to ‘activate’ the sponsorship like no other every year!

Our event activations have evolved since then to include not only all the on course branding, KM markers and gantries but we have consistently delivered engaging and innovative experiences for participants and spectators alike:

Every year our enormous branded helium heart balloons floating through the crowds creating fun photo opportunities and selfies which were shared online.

Innovative technology has allowed us create the Vhi Wall of Support – a large screen at the 7.7km point on the race which displayed personalised messages of support as participants passed by. We collect these messages at each registration event and on our website. Our technology ‘reads’ the tags of participants as they approached the screen, which activated a message that had been submitted for them. Many participants were delighted and motivated by their message stopping to take photos/selfies.

Our army of brand ambassadors at the finish line have distributed different Vhi branded goodies every year from freeze pops and ice packs to cool down to protein bars and fruit to replace lost energy.

In 2017, we created a unique Relaxation Area in Merrion Square Park featuring a tented area with lounging couches, hammocks, bean bags, and complimentary lemonade, tea/coffee and protein balls. Face painters and balloon modellers for the kids were all topped off with the best chill out music. This area is now established as the place to return to at the end of the run every year.

During the pandemic we turned to both symbolic and virtual engagement as participants were unable to come together to compete their 10KM – they completed their 10KM in their onw way with continued support from Vhi through “Cara” our statue for every woman and in 2021 with our mobile Refueling Stations who spotted women all round the country in their Vhi t-shirts and pulled in to give them water and protein bars while on their 10KM run.

We celebrated the return to the main event in 2022 new look “Celebration Square” to welcome participants back to Dublin City Centre for the event.