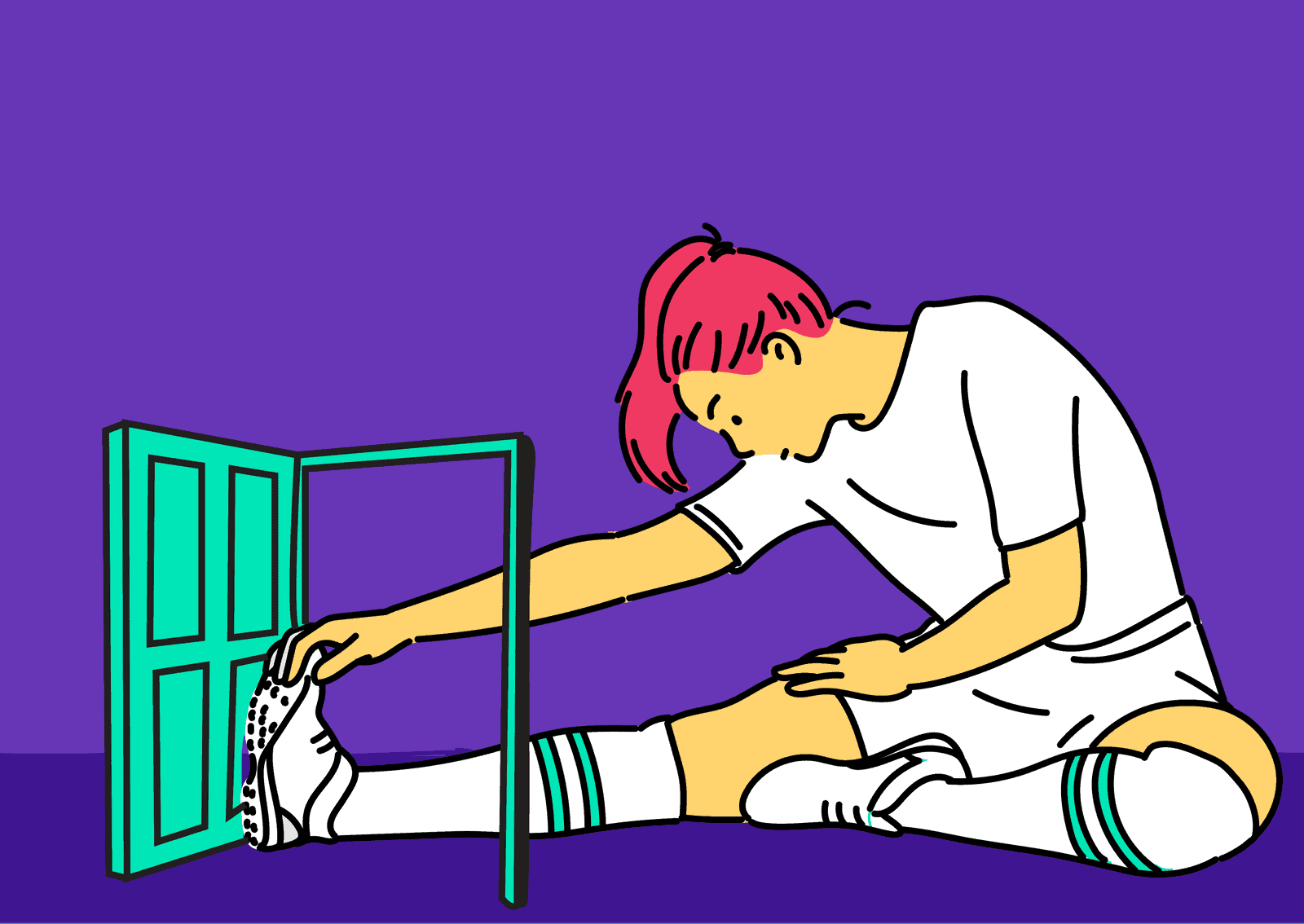 Let’s be honest, Covid has been a shocker for so many of us on so many levels but one of the few rays of sunshine in all the doom and gloom has been the rise of women’s sport. It’s been a rare pleasure through the dark times of lockdown marking the significant increase in interest, awareness, popularity and brand spend around women’s sport as the public looks for social equality across the spectrum and businesses search for value for money.

The recent report ‘Closing the Visibility Gap’ issued by Women’s Sport Trust predicts revenues generated by women’s sport in the UK are set to grow to £1bn a year by 2030, up from £250m a year currently.

Of course, a clear demonstration of this anticipated spike in interest is the landmark broadcast deal by Sky Sports and BBC for the Barclays FA Women’s Super League. The three-year agreement sees a 75% investment revenue going into WSL clubs and 25% to the Women’s Championship in order to grow the game from the grassroots up to the professional game.

Likewise, in a deal close to my heart, the BBC has also raised its game and committed to televising the Women’s Six Nations this season, with all games available on BBC iPlayer, not to mention Saturday’s England v France Final taking place on BBC 2.  I have no doubt that having women’s rugby on free-to-air network telly will bring this thrilling sport to a huge new audience and inspire a raft of new players to don their boots.  With legends such as Maggie Alphonsi and Nolli Waterman really pushing to raise the profile of the game to all rugby fans, my hope is that the women’s game will expand as rapidly as Nolli flying over the tryline!

In fact, Nolli recently released a truly inspirational documentary together with HSBC highlighting the issues faced by women in sport.  The international full-back’s raw honesty on the personal and professional journey she has been on and her determination to succeed will surely encourage other young women to chase their sporting dreams as well as opening up the wider conversation about mental health and online trolling. I definitely recommend you give it a watch.

To build on these successes and further increase the popularity of women’s sport we need sustained investment from the sporting world.  In simple terms, high profile broadcast deals lead to serious investment by brands keen to benefit from the direct commercial benefits. But it’s also because brands can see the huge opportunity available to add value to fans and players alike, as well as make huge improvements to grassroot community structures. Being frank, women’s facilities at a lot of grassroots clubs are not up to the same standard of the men’s, which has to change if we want girls to get involved and become passionate about sport. Girls’ facilities can’t be second rate to those offered to boys’ as otherwise it sends a clear message out as to which of the two is considered more important.

Guinness has just launched a new campaign called ‘Never Settle’ to tackle the lack of representation of women in sport.  They have discovered that only six percent of sports media coverage in the UK is dedicated to female athletes and teams, with just 18% of all biographies on Wikipedia being those of women. Indeed, the brand says the gap widens further in sport where just three percent of 14,916 rugby-related biographies are of female players. The current Guinness Six Nations men’s squads have 392% more words devoted to them than their female counterparts.

The brand also points out that only 30% of the current Women’s Six Nations squad players have a presence on Wikipedia at all, while of those who did, some 86% didn’t have an image or more than a very basic biography.

In order to tackle the inequality, Guinness has invited Wikipedia editors, women’s rugby fans, writers and journalists to take part in the campaign, adding to the stories of past and present personalities.

The brand is also working with players ‘on a global scale’ to update their Twitter profiles, ensuring they are in line with the new verification standards. According to Guinness, this will provide female players with the same platform to build connections with their fans, and will also help to improve and increase conversation about the players and the sport globally. 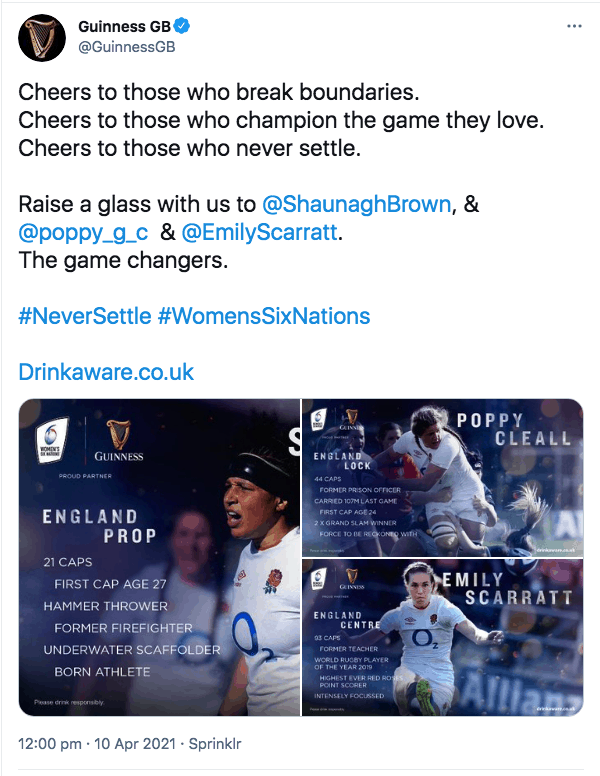 In a similar vein, Microsoft recently showcased their commitment to women’s sport at the US Super Bowl, celebrating the first-ever female coach to feature in the Super Bowl – San Francisco 49ers Offensive Assistant Coach Katie Sowers.

Microsoft created an awesome piece of content about females breaking down barriers and making it clear that women belong in all areas of sport. It’s one of those content pieces that emotional wrecks like me love to watch – her voiceover is designed to inspire and firmly promotes the ‘see her, be her’ ethos.  The powerful line “all it takes is one and then it opens the door for so many” is designed to empower the next generation of women.

As I said earlier, it has been a tough year for all of sport with no fans in stadiums, cancelled matches, reformatted leagues and marketing budgets hammered.  In a year where Olympic heroes and heroines would usually dominate, the cancellation of so many large sporting events has meant that brands have adapted to focus on inspiring communities to come together to tackle social issues, to inspire fans and be a force for good.

Google, in particular, stands out as a brand that has authentically helped fans as a force for good.  Google backed the US National Women’s Soccer League Challenge Cup which was the first US team based competition to restart following Covid suspensions.  Google brought fans together when they couldn’t have them present in stadia by using Google Meet social video to host ‘virtual cheering sections’. It also ensured that people could easily follow the competition using the power of Google Search, by delivering latest competition updates in a single view with team standings and score if people were searching for more information about NSWL.

Google also partnered with England’s Lionesses allowing fans the opportunity to connect with the players on Google Meet.  The social campaign Google Cloud created around International Women’s Day 2021 was particularly impactful in celebrating other women’s achievements but also to make sure that women celebrate their own achievements, however uncomfortable that is for many.  Featuring Jill Scott, Beth England and Nikita Parris, the Lionesses trio each pay tribute to a ‘remarkable’ teammate before being asked to turn the spotlight back onto themselves.

As a woman who has worked in sport business for more than 20 years, I am delighted that women’s sport is finally starting to gain the recognition it richly deserves. Equality seems to be getting ever closer and as a mum to two girls it can’t come soon enough.  My girls play football, hockey and cricket and I am hoping that they won’t have any barriers if they choose to have a career in sport. What I do know is that we will definitely have family time on the sofa watching the Women’s Six Nations Final this Saturday on BBC2 at 2pm.  Who knows, maybe one of them will be the Red Roses Captain of the future!

Olivia Collier is Head of Verve GB office and has worked with Guinness on their Rugby and Racing sponsorship activation since 2013.  Olly and the team deliver all sponsorship rights across the Guinness Six Nations title partnership, the Women’s Six Nations, Home Union partnerships as well as Cheltenham Festival.

For more ongoing trends and insights, check out Verve’s new podcast: The Virtual Events Podcast. Our team chat about all things virtual. Each episode has tips, hints, what’s new, what works best, hope you enjoy it.

The podcast is available on Spotify, Apple Podcasts or wherever you get your podcasts : https://audioboom.com/channels/5045240 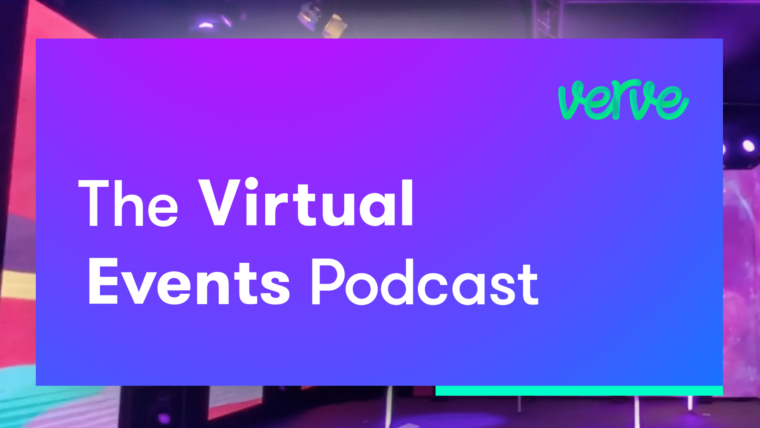 If you are planning a celebration, event or activation don’t hesitate to get in touch with our team. We offer a 360 service from planning, creative, production and execution in house. Get in touch here